I was born into slavery around 1752. The law in British Colonial America allowed another person to own me just because I was of African descent. I was the property of the Lee family of Westmoreland County, Virginia, and, by law, they had the right to sell me whenever they wanted. I could be separated from my family at a moment’s notice, never to return. I had the same heart and mind as any other person; how could they consider me property? Nevertheless, in 1768 the Lee family sold me to Colonel Washington for 61 pounds and 15 shillings, the British currency used by the colonials at the time. I was only about sixteen years old when I was separated from my family, and I continued to use the Lee name throughout my life. Luckily for me, the Washingtons purchased my brother Frank at the same time so I was not completely alone in my new home. My brother and I were filled with anxiety as we traveled north. We had no idea who our new master was or what sort of person he would turn out to be. 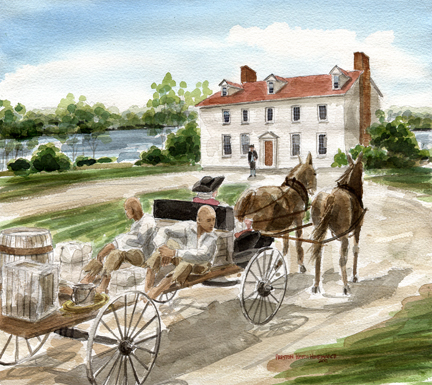